Rick McCue, singer/songwriter from Toronto with roots in Fox Harbour, 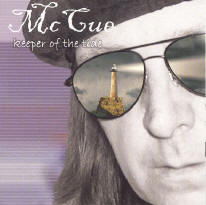 Newfoundland, has just released his long-awaited CD entitled, KEEPER OF THE TIDE in July 2005. And with this release, this wait is certainly a rewarding one. With all the CD’s that Atlantic Seabreeze receives for review, this CD is placed at the very top of the list with its content. Rick has written all music and songs on the CD and produced it as well. The CD jacket containing all the song words is a piece of art in itself.

Every song on the album is radio playable and without a doubt the whole CD is a true winner in every aspect with potential awards all over it. Its not very often a CD containing 15 tracks are all rated number 1, and this CD is the one with all tracks number 1. There are even tracks one entitled, St. John’s Floor will become a classic for years to come. Rick at present, is a member of The popular Kitchen Party & Friends band who perform regularly bi/Saturdays at Eastern Passsage in Brampton, Ontario, a club which is a home away from home for East Coast patrons. Many of the band members help Rick with the music on the CD. Their sound is incredible, and they are the most talented musicians that one can find anywhere in Canada.

Rick says, that all the songs on this CD are a result of chance meetings with his fellow friend musicians, a rediscovery on one’s roots and a love of home. And what an amazing discovery of music & song! Atlantic Seabreeze gives this CD a rating of 5 stars out of 5 stars.

For listeners to this outstanding CD, they will find out, that they will put the replay button on, and play the CD over and over again. Simply outstanding!!

Also appears on this album